Our Clearlight two-person Sanctuary Sauna is unlike any other.  It is the only true Full Spectrum infrared sauna available offering advanced near, mid, and far infrared technologies with virtually no EMF/ELF and 5/5 star ratings.  Our robust True WaveTM Full Spectrum heating system provides all the wavelengths 100% of the time to optimize your sauna session.

There are three main categories of the infrared spectrum:  near infrared, mid infrared, and far infrared. 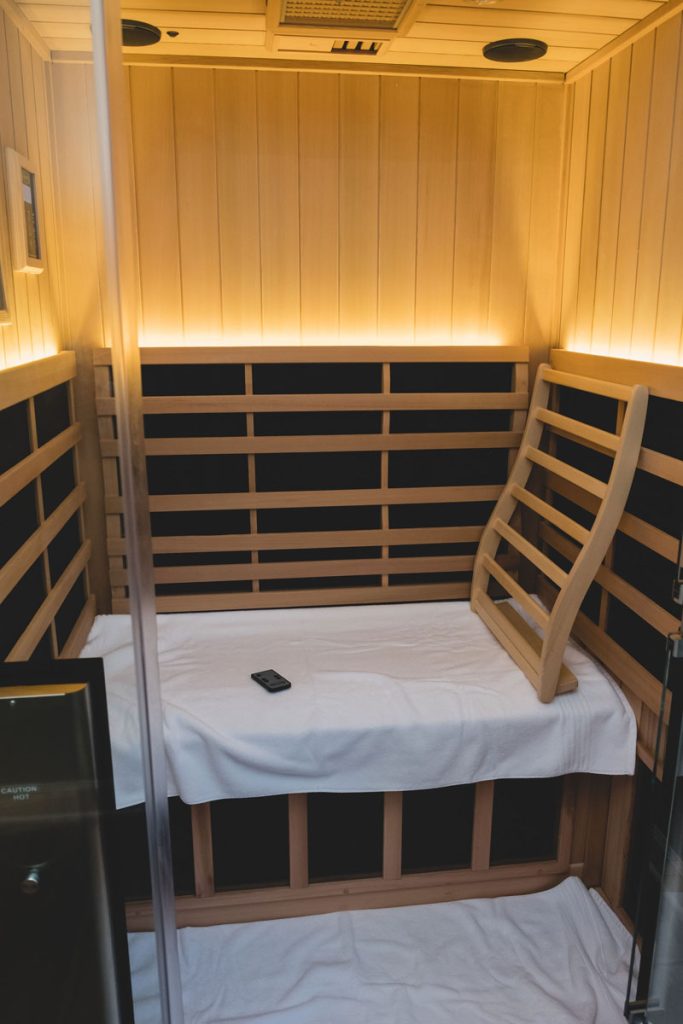 Sauna Use for Detoxification, Prevention, and Recovery of Disease

The Demand for Detoxification Solutions

In today’s world, the need for detoxification is greater than ever before.  There are mountains of evidence proving the fact that 1.) Toxins are at unprecedented levels.  2.) There is no way to avoid them.  3.) Everyone has accumulated toxins in their body and cannot detoxify them all sufficiently without the help of detoxification intervention.  4.) These toxic accumulations have been linked as an underlying cause to just about any disease known to man.  These facts along with the dramatic rise of chronic health problems have demanded more producing solutions to improve health and prevent disease (Rogers, 2002).

The Historical Use of Sauna Across Cultures

Saunas have been found to be especially useful throughout history.  In fact, heat therapy (typcialy in the form of steam, bath or sauna) has been valued throughout history by almost every tribe and culture as an effective healing modality.  Natural hot springs have been used since they were discovered by early nomads.  The Greeks and Romans are known for the popularity of their public baths for both recreation and health purposes.  Sweat lodges were built and used by Native Americans.  The Japanese, Chinese, Russians, Turks, Egyptians, Scandinavians, Finnish, and many other cultures had purification methods utilizing heat, steam, or baths in some sauna arrangement (Akpinar, 2007).

Thanks to improved technology, we now have saunas that are heated with electrical heaters and include near, mid, and far infrared rays.  While various forms of heat therapy and traditional saunas of the past have shown to be effective in numerous studies, current research now reveals that the use of infrared rays in saunas to be far superior (Wilson, 2002).  Far infrared wavelengths decrease the size of water clusters, giving them greater mobility and penetration in and out of body tissues.  Once these energized water molecules move in and out of the cells, they also carry toxins that were previously stuck.  FIR saunas can induce 2-3 times the sweat in less time with lower temperatures which is much safer and effective for even the most heat sensitive patients.  If sauna temperatures are too high (1600 F or higher), chemicals could be pulled back into the bloodstream and cause original symptoms to return.  FIR saunas trigger mobilization of chemicals from subcutaneous fat directly into the sweat.  Over weeks and months, an equilibrium can be reached, where chemicals stored in other organs slowly and safely get drawn out from under the skin storage area and directly into the sweat (Rayne, 2005).

Ron Hubbard’s groundbreaking results in his sauna detoxification program for drug addicts in 1970 brought much attention to the use of sauna for detoxification by doctors in a wide range of professions.  His protocol involved the daily use of sauna, exercise, niacin (for increased circulation and fat mobilization), multivitamins, and polyunsaturated fats.  His work is cited and referred to in numerous scientific documents and articles written by medical professionals in this field of research (Rogers, 2002)

One recent study based on that program implemented a detoxification project focused on helping rescue workers that responded to the terrorist attacks on the World Trade Center on September 11, 2001.  Upon collapse of these buildings, massive amounts of toxins were released.  Exposure by responders led to a wide range of reported health issues.  While acute respiratory distress was a common symptoms initially, weeks and months later these same workers reported symptoms such as gastrointestinal complaints, respiratory problems, depression, irritability, and mental disorders.  In a three year span, more than 500 World Trade Center attack responders between ages of 35 and 45, completed the sauna program, and the results were astounding (Cecchini, Root, Rachunow, & Gelb, 2006).

Before Treatment (which averaged 33 days)

Subjects missed a median of 2.1 work days per month

Had 4.4 days of limited activity

The number of days of missed work or limited activity fell to 0.2

84% of participants discontinued all their prescriptions because their symptoms had improved.  They also had significant improvements in thyroid levels, balance, reaction time, and even I.Q. (Cecchini, Root, Rachnunow, & Gelb, 2006).

Saunas have proven to not only be a major tool for detoxification; mounds of research have shown that it can have a prfound effect on one’s cardiovascular health.  In a study published in the Journal of the American College of Cardiology, just 15 minutes in a sauna a day for two weeks improved the function of the endothelial cells lining the arteries by 40 percent (Imamura et al., 2001).

Japanese researchers have found that sitting in a sauna is particularly helpful for congestive heart failure.  After taking daily sauna for four weeks, 13 of 15 patients with serious heart failure had significant decreases in blood pressure, an improvement in ejection fraction (a measure of the heart’s pumping ability), exercise tolerance and oxygen uptake (Crinnion, 2011).

Other Conditions That May Benefit from Sauna Therapy

FIR therapy has been used along with conventional cancer therapies as an effective method for cancer treatment.  FIR heat increases blood flow and improves oxygen supply to some tumors which can make cancer cells more responsive to treatment (Yamazaki, 1987; Flickstein, 1997; Rogers 2002).  Dr. Lawrence Wilson, M.D., states in his book that heat shock proteins produced by FIR therapy are key to inhibiting the growth of some types of cancer (Wilson, 2016).

Studies indicate improvements in fatigue, pain, sleep, and low-grade fever with FIR sauna treatments. Patients with CFR are often deficient in minerals and vitamins which lead to loss of cellular energy – making them more vulnerable to toxic build-up in their tissues.  This begins a vicious cycle of further nutritional depletion and a worsening of symptoms.  By utilizing FIR sauna therapy, patients can safely remove heavy accumulations in the body.  Research done in the U.S. demonstrated that nearly 80% of patients with CFS improved markedly by a guided detoxification program (Masuda, Kihara, Fukudome, Shinsato, Minagoe, & Tei, 2005; Masuda, Munemoto, & Tei, 2007).

Current evidence suggests a multi-faceted etiology with impaired cardiovascular function, inflammation and oxidative stress as being major contributors in the pathogenesis of dementia and Alzheimer’s.  Sauna use has been shown to improve the aforementioned precursors to the disease, yet no other studies have been done to directly link sauna use and its effects on dementia until recently.  A promising study done with 2,315 Finnish men ages 42-60 in 2017 showed an inverse association with the frequency of sauna use and dementia and Alzheimer’s disease.  During a follow-up of 20.7 years, men who use the sauna with only 1 session per week had a hazard ratio (HR) of .78; those who used the sauna 2-3 times per week had a HR of .57-1.06; compared to those who used the sauna 4-7 times per week with a ratio of .34 (T. Laukkanen, Kunutsor, Kauhanen, & J. Laukkanen, 2017).

Fibromyalgia sufferers are universally found to be malnourished, have lowered immune function, have one or more viral, fungal, or bacterial infections, and are unable to detoxify heavy metals such as mercury, cadmium, aluminum, etc.  Therefore, FIR sauna therapy renders a safe and effective method of detoxification for those suffering from fibromyalgia (Rogers, 2002).

In one study, female patients with fibromyalgia received FIR sauna therapy at 1400 F for 15 minutes and were subsequently covered by a warm blanket for 30 minutes.  Each patient received ten treatments.  All patients cut their levels of pain in half after the first sauna session.  By the 10th treatment, the pain relief became invariable.  Pain symptom outcomes remained low throughout the study (Matsushita, Masuda, & Tei, 2008).

The penetrating heat from the FIR sauna safely induces an artificially induced fever.  Natural fevers that we get when sick are known to enhance metabolism and inhibit the growth of invading viruses and bacteria; this can also hold true for artificially induced fevers.  As the body attempts to combat the artificial “fever,” the body’s immune system is strengthened.  Viruses, tumors and toxin-laden cells which are weaker than normal cells are excreted as they tolerate heat poorly.  Raising the body temperature causes infections to heal more quickly (Rogers, 2002).

A study conducted on 28 mildly depressed people with 14 in a treatment group and 14 in a control group, were given sauna treatments for 15 minutes, followed by bed rest with a blanket for 30 minutes for 20 sessions over a four week period.  The treatment group had significantly fewer somatic complaints, improved appetite and felt much more relaxed (Masuda, Nakazato, Kihara, Minagoe, & Tei, 2005)

FIR Saunas are a natural, healthy way to burn calories without exercising and are complimentary to any weight loss program.  Medical research has shown that FIR sauna therapy can help a person burn approximately 600 calories in 30 minutes (Dean, 1981).  The inability to lose weight can also be associated with toxicity.  As toxins are removed with FIR sauna use, the weight will naturally be lost (Rogers, 2002).

While the vast majority of studies focused on the benefits of FIR sauna therapy for detoxification purposes, many others focused on the effects of increased circulation and improved cardiovascular function.  It is a safe assumption that if you can properly detoxify, increase circulation, and improve cardiovascular health by using a sauna, you can prevent or improve just about any health condition.  However, more specific studies need to be done on larger populations and for longer periods of time to further support claims listed by manufacturers of saunas.  The list of health benefits listed in this article is by no means comprehensive.  It is important to note that many of the studies referred to also incorporated specific protocols involving supplementation and exercise for optimal results.  Although sauna therapy has been found to be one of the safest healing modalities, there are still contraindications and one should always consult with their doctor before attempting to use a FIR sauna on a regular basis.

Wilson, L. (2016).  Sauna Therapy: For Detoxification and Healing. Prescott: The Center for Development.

Wyss, V. (1966).  On the effects of radiant heat on different regions of the human body.  Behavior of cardio circulatory and respiratory activity, oxygen consumption, oral and skin temperature during infrared radiation of different areas in acclimatized and non-acclimatized subjects. Med Lav., 57(4): 262-85.