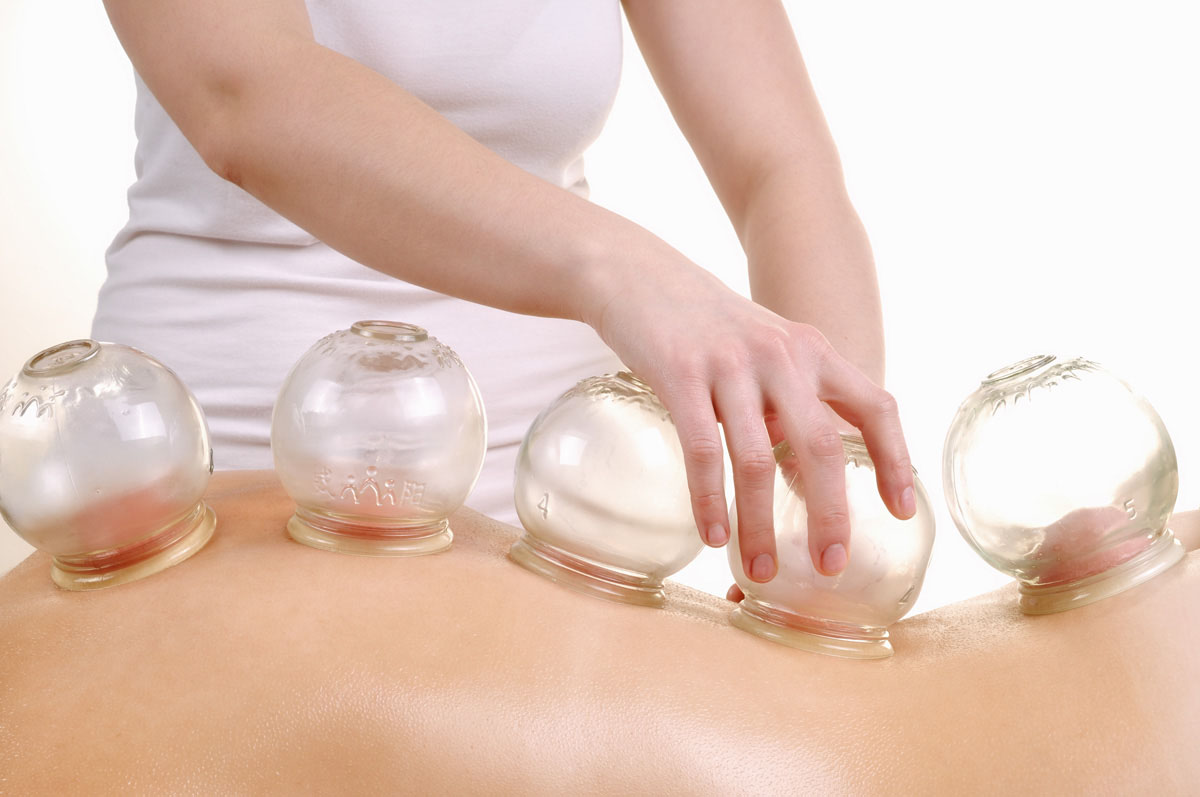 The 2016 summer Olympics had its share of exciting performances, upsets, and photo finishes.  But for days after Michael Phelp’s first appearance at the games, its seemed all anyone could talk about was “cupping.”  It’s an ancient therapy that left multiple circular discolorations on his skin.  During “dry cupping,” suction is applied to the skin for several minutes; sometimes it is combined with massage, acupuncture, or other alternative therapies.  (“Wet cupping” is similar except that blood is removed by making a small prick in the skin.)

The most common misunderstanding regarding one of the most powerful and beneficial after effects of Cupping, is the marks that sometimes result.

When injuries occur deep in the muscle, bleeding often occurs causing deep bruises.  There will also be edema in the area involving the coagulation of sticky proteins.  The combining presence of these elements usually results in stagnation of circulation to the area – resulting in pain, dysfunction, and chronic conditions.

The vacuum formed by Cupping draws up the old non-circulating stagnant blood and sticky fluids from the area, bringing them up to the surface away from the injury so that healthy free circulation can be restored to the affected area, thus creating space for oxygen, living cells, and nutrients for faster recovery.

Where there is dead, static blood, lymph, cellular debris, pathogenic factors, and toxins present in the body, Cupping can leave marks which indicate that the stagnation or disease has been moved from the deeper tissue layers to the surface.

In many countries – this is a non-issuse, they’ve experienced themselves the amazing detoxifying effects suction therapy can provide.  But in some industrialized countries, where Allopathic Medicine still over-shadows more holistic, natural approaches, these surface discolorations are misinterpreted as damage rather than the result of debilitating agents being drawn to the surface.  Westerners also live in an image conscience society that also has a heightened sensitivity to domestic abuse… so, without sufficient understanding, some people are unnerved upon seeing this important after effect.

Once people understand what these marks are, and feel the results – the concerns disappear.

The color and pattern of the marks depend on the level of stagnation in the area, and range from a bright red to dark purple, usually lasting 3 days to a week – sometimes longer if the person is very sick or sedentary.  If there is no stagnation present, there will be only a pink marking which disappears in a few minutes to a couple of hours.

If the person receiving treatment sweats a lot on a daily basis – no marks may even occur.

People who live/work/play in toxic environments ( or where exposed to a heavy dose of toxic material) may consistently mark.

Sites where there is old trauma or injury may require multiple Cupping treatments to remove all stagnation.  You will find in follow up treatments the marks will be progressively lighter as the pathogens are systemically removed from the body.

Those unfamiliar to Cupping therapy, believe the Cupping marks to be bruises.  In North American society bruising is considered an injury.

Bruising is caused by impact trauma with compressed breakage of capillaries and a reactionary rush of fluids to the damaged location from the tissue injury.  There is no compression in correctly performed suction cup therapy.  Although it is quite common during Stationary Dry Cupping (left static for 5-20 minutes – see below) to achieve dramatic ‘marks’ or ‘discoloration’, the less aggressive action of moving the cups, minimizes the intensity and duration of the discolorations.

Often, when a condition exists within deeper structures where sufficient pathological factors and stagnant fluids (toxins, blood and lymph) are dredged up during treatment, discoloration will appear on the epidermis.  As treatments cumulate and the release of stagnation and buildup has been released, dispursed and drained – (sometimes as quickly as the 2nd treatment) no discoloration is likely to occur at all – even though each time the cupping may have been focused on the same area, for the same duration, and with the same amount of suction.

This action is the result of having internal unwanted toxins systemically purged.

But, regardless of the obvious therapeutic value of drawing these agents out of the body, it is vitally important to be educated to the nature of the discoloration and self-care.  Patients are provided with a thorough understanding of the marks to assist them in relaying accurate information to others who might see it.  If there is concern about leaving discolorations, then suction cup therapy is not for you.

There are simply people who will not want such marks – no matter how potent the health benefits.  And, being uneducated about the marks (like the ‘significant other’,  and yes, even other health professionals, upon seeing it on the skin can perceive it as bruising and become very concerned.

When circulation is sluggish or compromised in an injured or diseased area of the body, insufficient oxygen gets to the cells, and there will be a local build-up of waste products.  When skin is pressed, the blanching that occurs is slow to fade.

Suction pulls toxins, pathogenic factors, blood poison, dead lymph and cellular debris from deep within the tissues to the surface.  These debilitating agents are then more easily expelled from the body.  The deposits dissipate from a few hours up to several weeks, depending on the amount of stagnation and the patients post treatment activities.

The quality of pathogenic factors varies according to the severity of the patient’s blood stasis – which correlates with the nature, severity and type of condition they have.

It can appear from a light pink to a dark purple but is usually a shade of red.  Often tiny raised bumps will appear.   Sometimes a clear fluid will be drawn to the surface.

These are all results of disease and toxins being removed from deep within the tissues.

The more discoloration that surfaces – the greater the level of stagnation and toxicity needing to be purged from the body.

Usually, the practitioner will see the greatest amount of deposits being drawn to the surface in the first few treatments – this is a good thing.  The deposits will lessen in intensity as the deeper issues are resolved and the stagnations and toxins have been dredged up and flushed out via the body’s own circulatory systems, expulsion form the pores and sweat.  Sweating is a great after treatment follow-up for patients to help get rid of the garbage they’ve released.

Although marks look painful, they are not.
Patients usually feel an immediate sense of relief.